The Grosvenor in Birmingham is a tricky chap to get to at the moment on account of a herd of roadworks around the place, although if you’re on the choo-choo, it’s pretty straightforward, being two minutes walk from Birmingham New Street station – in fact it the train station would be handy spot to park if the rates weren’t daylight robbery (that being the casino’s job).

The casino is located above a pub called, with a deal of common sense, the Railway – in fact the casino smoking terrace overlooks the platforms, and so is probably a trainspotter’s dream – trains, booze and gambling all in one place. Having said that, if they were into booze and gambling they probably wouldn’t spend so much time spotting trains, but that’s not really relevant here.

The entrance area is a little odd, there’s a geezer behind a desk who I naturally approached to get the membership details sorted out, until he told me to go upstairs and deal with reception there. This begs the question – what was he doing there, then ? I did start to wonder if he was a bit like that Japanese soldier still fighting on an island 20 years after WWII finished, and he was still there simply because nobody told him he wasn’t needed any more … then decided he was probably a car jockey.

So, once inside you’re looking at an oldish building, with the immediate options being the slots, a mixture of old and new (with 4 Pharoah’s Treasure machines next to each other – they must really like Egyptology in Brum). An ugly carpet is overshadowed by a gargantuan chandelier over the gaming floor, which was pretty busy on my Tuesday evening visit, with plenty of Chinese chaps in evidence – obviously a bit of a focus here, they even had a mini Punto table on the main floor.

Upstairs there’s another bar (the main one is on a slightly elevated area overlooking the gaming floor) and the poker area is also upstairs, which glories in a roulette wheel marked up as a “student night you spin you win” promotion. Classy. There’s also a rather odd final table room for the poker, all hemmed in and with glass wall panels – looks a bit like somewhere you’d stash Hannibal Lecter, if he happened to pop into a casino in Birmingham. And if he existed.

All things considered it’s a pleasant enough site, aimed at gamblers rather than socialites I suspect, with that handy train station to get you home. 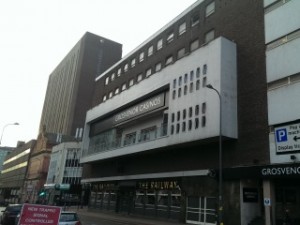