The Genting in the Wirral is a funny old place … as you drive past the signage and the casino, you realise, too late, that you drive through the casino to get to their car park – and for a soft southerner it doesn’t seem like the ideal place to be stopping the car for any reason, so it’s round the block to get into the car park and scurry into the casino.

Those first impressions are soon allayed by the friendliest reception team I’ve ever met – two very welcoming gents soon got us joined up and into action. They also pointed out a very odd feature – the toilets are downstairs while the main gaming floor is upstairs – I thought that concept was only for pub chains, but there you go.

It’s not as if they are short of space in general, although it’s clearly a site that has seen better days. Recessed neon in the ceiling is a style that’s been and gone for sure, and the carpet has some extraordinary areas that are genuinely more tape than carpet. They evidently have a concrete floor (most modern casinos have a raised floor space) so there are several thin columns coming down from the ceiling holding power and data cabling, and generally getting in the way of sightlines.

The place glories in some museum-piece kit as well, with very old Alfastreet electronic roulette and all single game slots, some of which I genuinely think I’ve never seen before. It didn’t stop the locals having a go, though, with 8 or 9 in play at any one time. Due presumably to the age of the machines, there were no linked jackpots on offer such as Fort Knox.

It seems to be a Chinese orientated place for the most part, a point confirmed by my new mate on reception – they have a mini-Punto table in the pit, and it has the feel of the sort of place that’s much busier on traditional Chinese nights of Sunday, Monday and Tuesday.

Overall it’s the sort of place that if it were smaller, you’d say it had character all of its own. As it’s actually quite sizeable it actually shows its age quite considerably, and if there were any doubt as to its vintage – it has a dado rail! 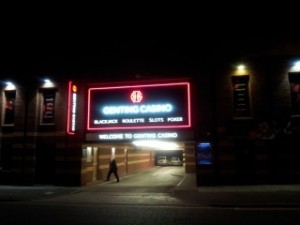