Newly refurbished spot in the middle of Liverpool's kebab alley.

I went in search of the this Genting site, tucked away in the bowels of Liverpool, Satnav on the dash (cunningly disguised as a cheeseburger to prevent theft). It’s a tricky one to spot, even when my Satnav told me I’d arrived – for some reason they have signage almost the exact same colour as the rest of the buildings on the street. Nonetheless, experienced casino hunter as I am, I was able to follow the smell of broken dreams and crushed aspirations to the front door.

Genting still operate a membership policy – or at least they do in a way. You don’t necessarily have to show ID, but you do have to fill in a tedious form – luckily it’s all a bit quicker if you’re a member of other Genting sites. We wandered in and headed for the bar.

It’s a bit of a subterranean adventure, going into the site, so an adult beverage seemed to be in order. We were served by the aptly named Stella (rumours that her night shift colleague was a Danish man called Mr S’Berg – first name Carl – were unfounded. I’ll get my coat). It’s a funny old site, looking like it’s been refurbed in the not too distant past yet still quite old fashioned. There’s nothing that puts you in the “quality entertainment venue” frame of mind more than handwritten stickers on the glass racks saying what type of glasses are for what type of drink ….

The gaming floor is pretty well done, reasonable minimums (£2 Blackjack, 50p roulette) and the slot offer is a mix of fairly old kit, with some bang up to date stuff as well. We also had the entertaining sight of a gent playing roulette with £1 cash chips – he had two or three on some numbers, but at least one on every single number. Now, he might just enjoy getting paid out, but I think we all know – except him – that all you’re doing is guaranteeing a loss every spin. They won’t be told!

After having a dabble on their slots – and once again coming up against the infuriating fact that you can’t cash out without a membership card, a fact I’d forgotten and the receptionist didn’t mention – we took a seat on the fat sofa on the floor. This was almost the end of the night for us – they’d clearly turned up the gravity such that we almost couldn’t get out of them – and then a quick circuit of the floor and we were away. It has the feel of a real gambling site, this one, not really geared up for taking the wife for dinner – in fact the restaurant reminded us both independently of a Travelodge breakfast area. However, judging by the action, looks like it trades pretty well, so if you want a punt rather than a 5* experience, give it a shot.

I happened to be headed back into Liverpool recently, and the Renshaw Street site has had a bit of a refurb. It’s all very spiffy now, with its How Mei branded restaurant, and feels a whole lot more comfortable and welcoming. It really has changed the feel of the place – if not the clientele – and now wouldn’t be the worst option for a drink or two. 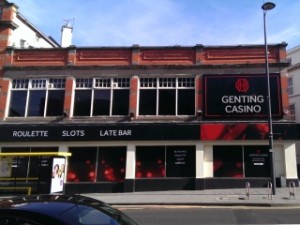