A touch of class on the outskirts of Brum, not far from the cricket ground

The Genting in Edgbaston sits on Hagley Road, the main route out of the city to the west, and a fairly long walk from the delights of Broad Street. It’s the casino formerly known as the Midland Wheel, and in fact may or may not have been patronised by some (not so) young men known to me in years gone by staggering about after a day at the test match just down the road.

It’s now firmly in the Genting camp, however, and has had a refurbishment in early 2013. The nature of the building, which I believe is listed, means that the full new Genting look wouldn’t have suited this site, but they have done a good job in a slightly more muted décor, with the usual browns and creams in evidence. They appear to be trying to go semi top end, judging by the dress code sign on the door, and the clientele I saw were relatively well dressed in the main. Don’t get me wrong, they haven’t gone for the casino suicide option of no jeans, but the sign at least suggested no sportswear. I imagine 30 stag nighters dressed as Virgin aircrew, the Honey Monster or Virgil Stacey might have struggled, mind.

There’s a big wraparound car park outside, and once I’d wandered in, I settled down at what turned out to be the most generous (modern, Sabre brand) electronic roulette machine in the UK – lucky that I won straight away really, as once I realised I’d have to pay an outrageous £1.40 for an orange juice I might have thought twice about paying them anything else for anything. Still, it didn’t hurt my mood to pick up a wedge of cash, of course having to cash out through their card system. The seating’s a bit odd on these ERs, you should remember to adjust it down before you get on, otherwise you are in danger of getting wedged in, and then when you pull on the lever there’s a kind of explosive decompression, and no-one wants to be making a tool of themselves on a busy gaming floor. I did it so you don’t have to !

The bar area is very small, and on the right of the casino (from the entrance) is the restaurant area, which looked perfectly pleasant. There was also signage pointing upstairs at private gaming and conferencing areas, but I’d be surprised if they got much trade to be honest.

Oddly, the whole place smelled slightly of something like fly spray, which is a little odd. The terrible truth is that casinos have to have the exterminators in every now and again, with beasties living in the carpet and biting the legs of the dealers (no, I’m not making this up) so perhaps I’d timed my visit just after theirs. No matter, it’s another quality Genting site and certainly recommended. 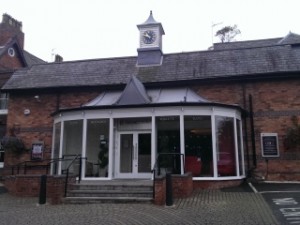