Lovely site in a lovely town

Torquay …. it conjures up images of Basil Fawlty thrashing his car with part of a tree, crappy B&Bs and desperate miserable families trapped in a peeling-wallpapered room, watching rain lash down while wishing they were dead.

Well, I can tell you it wasn’t like that at all on my visit.  In fact, on a fresh October morning, with the sun up and the last days of summer slipping away, the view as you drive into Torquay is absolutely spectacular, and aside from the fact that it’s an unbelievably long way from London, at times you could easily feel like it’s the only place you could possibly want to be right then (except Vegas.  And possibly Scarlett Johannsson’s dreams*).

The casino isn’t exactly right on the seafront, in fact it’s a ways up a bit of a hill to get to the Genting site.  It’s worth the lung burning walk, mind, once you get there.  It looks pretty nice from the outside,but once you get inside it really is a fabulous building.  It’s had a refurbishment recently – the last time I visited before this review, it was in a pretty poor state (although I didn’t care much – I won £700 in a poker tournament ….)

To get there can be a drama – my faithful old Satnav sent me a most peculiar way through some tiny alleyways – in fact I was very much ready to retire said Satnav at one point (by which I mean destroy it with a large hammer) until I popped out right by the town. There’s a car park right outside, and two of the world’s most bored doormen, who were in fact inordinately friendly – perhaps they had nothing better to do, other than take care of about 15 punters, than make conversation.

Inside it’s a long, thin, multi-level site with some fantastic staircases that curl around until you’re deposited on the gaming floor. The floor itself is pretty standard, nine tables, some Sabre electronic roulette terminals, and the slots aligned along the side walls. There’s a tiny corner bar, and a very friendly valet team, one of which was kind enough to warn me how hot the Tuna Melt panini I had ordered was going to be. True to form I largely ignored her, and bit into a satanically hot food item that could have been used as a weapon.  I am writing this four days later, and thanks to the mouth burns I experienced I am still struggling with pointy foods – my Special K breakfast was agonising.  Listen to the nice ladies, they speak the truth.

It certainly is a unique casino building, and as well as the picturesque gaming floor you’ve got a balcony type affair around the top, which houses some loafing about type chairs, the standard Genting restaurant, and the poker area. There aren’t many nicer spots to play poker than this, although of course I am slightly biased after my result a few years back.

One of my favourite casinos in the UK, this one – if you’re headed down that way, check it out. 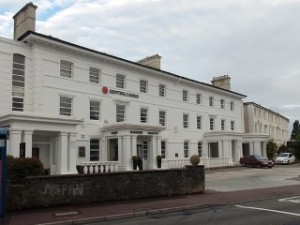