Huge piece of UK casino history, with not much danger of fighting the crowds to get in

The Star City in Birmingham was once Stanley Leisure’s jewel – until two things happened. Firstly, it turned out to be a bit of an echo chamber, with nobody wanting to visit the place, several miles out of Birmingham city centre, and secondly Genting bought Stanley and were lumbered with it.

Star City is a leisure development just off the M6 – it’s a bit like the old Grosvenor in Reading, easy to spot from the road but quite tricky to actually get to – use Junction 6 and double back on yourself, it’s a little bit counter intuitive – but dealing with Spaghetti Junction is always a little tricky.There are always quite a few people about in hte Star City complex, as it’s full of kid friendly stuff like Laserquest, an indoor mountaineering place, and lots of restaurants with a bit of retail thrown in.

As I discovered to my amazement after wasting one trip, it’s not a 24 hour operation, in fact opening at noon – and if you want a sit down meal, the restaurant only opens Thursday to Sunday, with a grazing / gamers menu the rest of the time. Once you get into reception, the usual membership gubbins needs to be addressed – while you are signing up, marvel at what looks like the oldest piece of telephonic equipment known to man behind the desk. I’m not sure what it is, but it actually looks like a 1980’s modem – if you’re old enough, think “Wargames”.

On the way in you walk past the entrance to the Show Bar, which was much trumpeted on opening but doesn’t seem to be in operation any more. Up the escalator / lift you go onto the gaming floor. It’s a very large site, with a huge poker room out the back, and there’s another mezzanine level above with the aforementioned restaurant – which when it’s not open, looks a bit like a Travelodge breakfast area.

The décor is a lot nicer than it used to be, with more muted colours, although I have to say the column cladding posters / artwork is amazingly hideous. There are plenty of tables and up to date slots available, and the staff all looked the part, even getting involved in a cringeworthy clapping routine for a tip received from one of the punters.

Off to the side is a separate cash game poker areas called “Action Jack’s” – a great idea, a bit like Gala Bristol. They’re a bit more blatant here, with some roulette and blackjack tables mixed in – they know where the money comes from …

It’s a major part of UK casinos is Star City, although not the success story they might have hoped for – I think the distance from the city centre, the amount of competition, and the UK attitude to drink driving have made life hard for them. Should you be passing on the M6 and fancy a punt, or a look at a part of UK casino history, stop by – as long as it’s after midday. 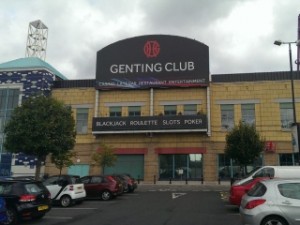