Flat out beautiful, among my favourite UK casinos, if not my number one.

Another new Genting, another masterpiece. This is a pretty recent build, and once again Genting have nailed the format, with the interior a lovely mix of dark browns, beige, black and some shiny finishes. While they still persist with the membership entry policy, they’ve even tried to make the place as easy to access as possible, with the restaurant and bar being on the “public” side of the control point, so if you don’t have ID or can’t be bothered to fight the inevitable reception queues, you wander straight in to have a drink and watch the gaming from above.

Having said that, before you even get to the bar you have to get in through the door. There are two reception areas, one either side of the building, the rear one only being open in the evening (and close to where you get out of the car park). Getting parked is another story altogether – as you approach the roller shutter is closed, but it rockets open in a satisfying Star Trek fashion when you get close enough. The job’s not done yet, mind – there are about 5 tight right handed circuits around the ramp to get to parking level one (ie Base Camp), and during the day it’s pretty busy so I had to do another 7 right handed circuits to get parked on level 8, by which time I started feeling a bit odd. I reckon I’d done about a mile just in the car park too so my Casinochecker expense claim better get paid ….

Once you’ve got over your wonky-head-syndrome and wandered into the casino itself – past reception and down the escalator (rather cynically, they seem to have an escalator down to the gaming floor but not back up – perhaps they reverse it later in the night) it’s more of the same delightful décor. It’s a big old site, but in standard modern fashion it’s designed to look like a series of smaller areas. The gaming looks like 16 tables in two pits, with a very large and nice looking card room – interestingly with a roulette and a blackjack table within, presumably an attempt to get poker players to pay their way a bit more.

There’s an Asian café off the main floor as well as the restaurant on the top deck, so your eating options are plentiful, and further investigation upstairs reveals a clubby / bar area out the back, with retractable walls, which they use to cordon off private parties and presumably baffle the noise form live acts.

It’s a mighty fine spot to pass some time, and if we ever get around to listing our top five UK casinos, Genting Sheffield is sure to make an appearance. 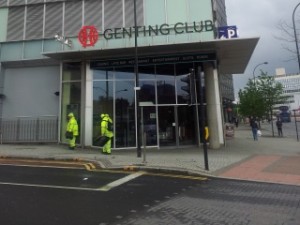