Just along from the main seafront, a tidy little club

The Genting in Margate is more or less on the seafront, just a little bit past the main drag with its assortment of miserable donkeys, optimistically named Dreamland theme park and assorted unhappy looking people, especially on a day like the one I visited when the rain was persisting down in lumps rather than drops.

The casino is actually right next to the Turner Contemporary, essentially an art gallery with the stated objective of “putting Margate back on the map”. As it happens it’s already listed on my map, and most disconcertingly close to France it is too, which is a worry. The arrival of the Turner building seems, judging by the amount of focus in the town, to be the biggest thing to happen to Margate since they filmed an episode of Only Fools and horses here – the “Jolly Boys day out” one – complete with jellied eels and presumably pie and mash – that’ll keep our Gallic cousins firmly on their side of our Channel.

Anyway, there’s a handy sized car park out the back, and the entrance is around that side of the building too. It’s evidently been refurbished recently, and is very tidy, with a particularly compact but appealing bar and small restaurant area. In fact small is the watchword here, with only seven tables plus the obligatory electronic roulettes and slots on offer.
The slots are located in two batches, a couple of small carousels on the right as you walk in, and the rest along the wall on your left. I settled at a nice IGT multigame terminal, although I was surprised to find that the sound had been disabled. This was compensated for, however, by a rather odd deep throbbing vibration that came through the machine in pulses – I’m pretty sure it wasn’t a design feature, more likely a life threatening fault … anyway, the rest of the machines had working sound, so maybe it was just this machine that was working on becoming self aware and taking over the world, Terminator style. This site also had the first “Community” style games I’ve seen in the UK, where some bonus rounds can be won by one player but apply to all players in the three-person bank, usually quite good fun. I didn’t have the squadrons of cash needed to trigger it, however.

For the first ten minutes I didn’t think there was a valet on duty at all – although I was in pretty early, with only slots and electronic roulette available from 11 am until 2pm, but eventually a friendly youngster rolled up. By then I’d been savaged by the slots, so took a walk to explore. It didn’t take very long – what you see on the ground floor as described above is very much what you get, with the exception of a poker / Mah Jong / Kalooki area upstairs, with a pleasant balcony. I can well imagine it would be an entertaining half hour on a Saturday night, standing by the railing overlooking the gaming floor and watching the various oddments of society rolling through. Maybe I should get more friends.

By the way, you’d better like the photo of the casino on this page – it was tonking down with icy rain as I ventured into the middle of a busy road to take it. You owe me a pint. 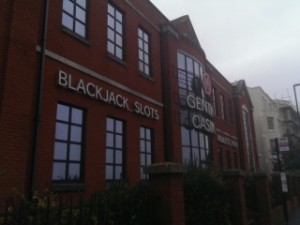