The newest casino in the UK at time of writing, I dropped by on their second day of trading. As you might expect, there were plenty of management types wandering around looking important (and worried) as well as staff all on their friendliest best behaviour.

This site, located on Shaftesbury Avenue, has an interesting history. Until Genting bought it up, it was the Fox Poker Club, a specialist poker venue (albeit with slots and electronic roulette). Evidently the owners were made an offer they couldn’t refuse, so it’s now a full service spot with all the trimmings you would expect from a national operator. They have left it a bit short of electronic and slot options mind, with only 6 electronic roulettes and 10 slots, they were all busy when I visited in the daytime, and pretty much later that night as well.

The décor is almost painfully Chinese themed, with everything in the building either red or light brown, and a very low ceiling featuring some even lower anti-personnel lampshades. I wouldn’t for one moment suggest some inappropriate racial profiling by Genting, but they appear to have designed the place exclusively for short people. Have they never heard of Yao Ming ? (who is a seven foot plus Chinese basketball player, not an insult from a Brummie).

They also have some handy low minimums for the smaller players – in not many places in London will you find a £2 BJ table and a 50p roulette at night. They also have some interesting maximums – evidently they cater to bigger players, I saw one geezer with £7,000 in front of him on Punto Banco, but the maximum on the Pair Plus side bet on my Blackjack table was £5 – grow some balls, Genting !

It’s not a very big site, but fortunately they have doors that seal off the dedicated Karaoke area. From time to time said doors would open to leak out what sounded like a cat being tortured with a rusty spoon – and next to the Karaoke area is the restaurant and bar.

It’s a pleasant enough spot, with cheap gaming and a cosy feel, albeit on my visits they hadn’t quite sorted the heating out, so it was cosier with a jacket on. We’ll check back in a while to see how they’re getting along.

Update – well, they’ve sorted the heating out, and appear to have ditched the Karaoke and stuck in a Punto Banco table. A casino operator dumping a bit of fun and putting in something that makes more money ? Who would have thought it …. 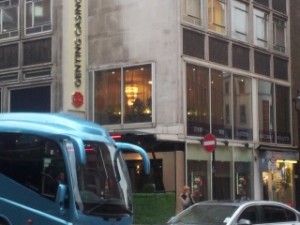