Edinburgh's biggest casino, with an array of other entertainment options around

As far as Edinburgh goes, this is the daddy casino, in terms of size. Situated on a large hellhole erm mixed leisure development, it’s flanked by all the usual suspects, with a cinema, bowling alley, Nando’s and plenty of other not entirely unexpected players, with a large car park underneath. The idea is clearly to present a full night out in one go, and as the location is a long walk from the city centre or a short cab ride, the idea is that you travel to site and that’s your night set up.

As you head down the stairs – it’s a basement location – the site opens up impressively, it’s gigantic.  There’s a touch of yesteryear about the décor some might say – recessed blue neon and an eye-watering carpet have been a bit superceded more recently in casino fashions by a less brightly lit theme – but it’s pleasant enough. There’s probably an argument to suggest that it’s too big, given I was the only person in the restaurant at 10.30 on a Thursday, and punters were few and far between, with the exception of the poker room. As you might expect, with a very large facility, this casino has the poker trade in Edinburgh pretty much sewn up it would appear – usually the casino with the biggest room and car parking to match will take the trade in any given city. They also, amusingly, play up to the image of the poker player as a proper slob by having a snack vending machine in the card room too, as well as huge tv screens showing sport.

The restaurant is a nice facility, with an open kitchen which dispels the suspicion that all the food comes out of a bag and into the microwave, although to be fair the food was excellent, and well served too.  A cut above your average casino dining experience I’d say.

There seemed to be a lot of management wandering about on the night.  Not sure what the collective noun for management would be – a herd, or perhaps a flotilla – but they seemed keen to attack the tea and coffee stocks.  Maybe they were expecting it to be busier. They had certainly provided some nice state of the art kit, with IGT multigame terminals in evidence, some linked up to the Fort Knox jackpot, and some shiny new kit on the main gaming floor too.  The slots were in a comfortable area off the floor, and aside from the fact that they didn’t seem to want to make me rich, were a pretty pleasant gaming experience with attentive service as well.

Genting have recently really started to push their loyalty scheme – the same one that has you putting your card into the machines to rack up points (no danger of coins being involved here). They might want to rethink some of their advertising however, a sign in the toilets going on about “if you’re going to spend a penny” you should use your loyalty card crossed the line, not into offensive territory but into cringing, itchy teeth  & curly toes territory. Generally speaking casino punters are older than 4 ….

All in all, a nicely turned out spot in the sort of location that probably looked like a better idea in concept when the idea first surfaced than in reality. Whether they can attract the critical spenders, as opposed to casual players, drinkers and watchers, remains to be seen. 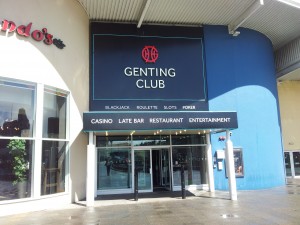