Brand new and beautiful, this is on my top 5 list

What a beautiful place. No, not Derby, although I’m sure it has its charms, but this new Genting casino (opened in 2012) is one of the more attractive UK casinos you’ll ever see. First, however, you have to get there ….

No doubt very straightforward for the locals, finding the place from the M1 is a bit of a drama – perhaps I should have invested in a sat-nav that cost more than £50 on reflection. The real fun starts however when you get to the site, and try to get set in what has to be the strangest car park in the western world. The casino is adjacent to / part of the Westfield shopping centre, and uses their car park. Aside for the fact that the entrance is all but invisible, you’re still not done with the pre-casino entertainment. Firstly the ticket machine had run out of tickets, necessitating a reverse manoeuvre not seen in the Highway Code – I reckon I should, on leaving, have told the machine I’d run out of money as well, maybe we could call it even. Next there are untold dozens of disabled bays – perhaps the next Paralympics aren’t in Rio after all, but Derby. Finally there’s a staircase clearly marked for the Genting, although you might want to give it a miss if you’re not a fan of cobwebs, dark spaces, or smells of dubious provenance. The final fun comes at the bottom of the staircase, when you open the door to be confronted by a steel cage with a lever marked “push” on the door and a menacing looking red button. I know it sounds like some sort of CIA training scenario, and felt a bit like one too. Pushing the lever marked push did nothing, and the red button looked more like an alarm / ejector seat than something useful. Eventually I gave it a poke, and it turns out you have to push the button, then the door, and you’re free again.

After all that, thankfully the casino itself is a triumph. They have a bar area on the ground level, which presumably anyone can use, then being greedy have two lots of reception – one at the bottom of the stairs, and another halfway up – presumably they man the higher one when it’s busy.

Coming out onto the main upstairs gaming floor is all worthwhile however, it’s fantastically well fitted out. If you’ve ever been to the Aria casino in Vegas, it’s like a mini-version of that, with a smashing bar area and restaurant (although the bar area seems to have stolen the “G” illuminated ceiling, but spent about 1/4 as much money on it). The seating around the bar area is also fantastic, with comfy booths and a stage area for entertainment. There were some mysterious stains on said seating however – perhaps wipe-clean might be best rather than something more exotic. I decided against the scratch and sniff test, I’m sure they were just cocktail spills. As for the stage, there were signs up saying they had a psychic evening coming up. Got to be the easiest gig in the world for a psychic, doing a casino – just tell everyone, “you won’t win”. Simple.

I visited early in the day before the tables opened at 2pm, so only the slots and electronic roulettes were in play. Those areas are all very well turned out, modern gear, and even a growing sight in casinos – a couple of FOBT machines, exactly as you’d find in bookies, with the mandatory group of lads around it, clearly thinking they were going to be the first people in history to crack roulette.

Overall, this is a site you should see, whether you want a night out, a punt, a game of poker or just to experience one of the nicest casinos in the UK. 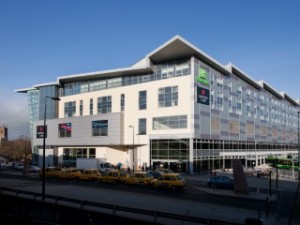