A unique casino in the heart of Chinatown, which has had more names than Prince.

The Genting Chinatown used to be known as the China Palace before it was bought out (and as Hurst St in the meantime), and has held these names for its amazing collection of fine bone china teacups and plat … no it’s not , of course it’s because it’s stuffed to the gills with Chinese punters. It’s located in the Birmingham Chinatown, not far from the traditional restaurants and, erm, traditional lap dancing club, Legs 11 Chinatown.

The Chinese community are generally known as casino regulars, and this place would tend to prove the point – I visited at 2pm on a Wednesday, and there were two Punto Banco tables in action and I was just about the only non-Chinese face in the place. Generally speaking they’re lovely people, the Chinese community, and the Genting Chinatown seems to be as much of a social club as a casino, with some amazingly noisy Mahjong games taking place and plenty of lively conversations. There were also some older Chinese guys wearing the most amazingly cool hats – frankly, the Hollywood A list have a lot to learn in terms of “you think I look stupid but I’m cool enough to just … style … it …out”-ness.

Anyway, it’s a long haul up the stairs to get to the gaming area, so jump in the lift. As you do, reflect on the frankly amazing fact that everything, and I mean everything, in the place is either red or black (plus the chrome handrails and practical stuff). Walls, lights, lanterns, uniforms, tables, seats etc – quite bizarre. Anyway, it’s all very comfortable (apart from being hotter than the fires of hell), and in fact has an added feature in that it does in fact smell slightly of Chinese food, in a good way (is there ever a time when it doesn’t smell good ?). That may be due to the Hou Mei restaurant on site – I didn’t check the menu but I wouldn’t be surprised if they serve the more traditional Chinese food, which isn’t always that familiar to a Western palate, so make sure you know what you’re ordering before you get chicken’s feet etc.

The gaming itself is pretty standard with an emphasis on Punto Banco as noted, and the usual mix of slots including some older games, probably favourites of the bigger players. I also spotted the most stupendous Beard / Mohawk combo on one of the dealing staff, honestly sharp enough to cut your finger on. Well played young man. Should the gaming get a bit boring, there’s a Karaoke room next door, no doubt host to many strange sounds akin to hearing a cat being disembowelled with a rusty spoon. If it’s all too much, head next door to the amusingly named Ming Moon restaurant.

A fairly unique site, this, and one worth visiting for sure. It even has its own booby trap – if you’ve had a couple of adult beverages, be very careful if you go to the Gents near the cash desk, the floor has a sharp downward slope on it – if you were boozed and on roller skates, you’d be doomed. 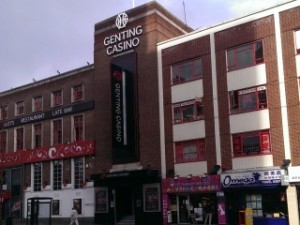