Finally, Genting have refurbished their Brighton site, and what a job they’ve done.  For those who haven’t had the pleasure, the previous incarnation of Genting Brighton was, to put it politely, a rather down at heel spot – I think in the previous review I described it as something of a hole – but now it’s in line with the rest of their estate, and a pretty charming small casino.

It’s not moved – it’s still on Preston Street which could reasonably be described as the home of Brighton’s eclectic restaurant trade.  It’s not quite kebab shop street – there are plenty of sit-down restaurants (including China Garden, who I naturally sampled while I was in the area – very nice too) as well as the late night fast food options, ranging from reasonably appetising to downright menacing. You never see any roadkill near a kebab shop, I wonder why …

Anyway, the site itself is unrecognisable, and now is in the beige / ivory / red scheme that you’ll see in most Genting casinos. It’s still very small, although now have I figured out the different levels – there’s a downstairs area which has some (apparently unused) poker tables, a few slots and one lonely looking Blackjack table (as well as the toilets).  I’m told in the New Year it’s going to be transformed into a private gaming area – we’ll see how well that works, I‘ve not seen many “Salle Prive” options work in the UK outside Manchester.  By all accounts this site does pretty well out of the top end trade in Brighton, mind, so perhaps it’s a winner.

The main floor is very compact – possibly putting it rather politely – and there’s no room for a restaurant, although the valet staff will sort you out with a panini or similar if you like (although beware the napalm snack – note Genting Torquay …)  The bar, however, is vastly improved, and has some comfy seats where you can relax and sink a pint or two.

True to form, I am a huge fan of one thing in particular here – the lampshades. They’re just lovely.  I love a casino lampshade, from the mahoosive ones at Aspers Stratford to the nutty ones at Manchester 235 and the sweetie shaped ones at Aspers Northampton, but these ones might just win the not-especially-coveted prize of “Best casino lampshades in the UK”. The ceiling is pretty low so to avoid unfortunate lampshade / head interfaces, they’re not very big, but have a cool intricate pattern – reminiscent of Japanese paper cut out art – on them that just warms the heart of a tedious casino geek.  That’d be me.

It’s a vastly improved site now, and with more works to come will only get better. I wasn’t in a rush to check it out after the first refurb – it used to be, honestly, one of the ropier casinos in the country but now it’ll be a pleasure to drop by again and see the finishing touches. 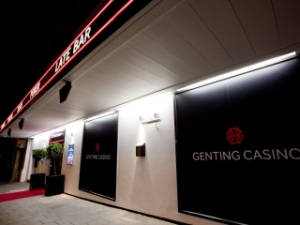