Tidy tiddler with a strip club just about next door

The Genting in Bournemouth isn’t the easiest place to find, but once you get close you’ll soon spot it since it’s two doors down from the local Spearmint Rhino. For those of you not familiar with the Spearmint Rhino, and it’s not especially easy to guess the business from the name, it what is euphemistically named a gentleman’s club. In other words, it’s full of strippers. It would be an interesting bit of research to find out if the lap dancing business does particularly well out of being next to a casino – perhaps I should ask the bosses at UKCC for some expenses to try and find out.
Anyway, my entry to the site was enlivened by what I saw on the front step of the casino. It appeared to be a bit of kitchen roll with a mysterious brown stain on it. Either someone needed to wipe a tripe of Marmite of their kid’s face or …. Well … something unpleasant had happened. I elected not to give it the taste test to find out which.

Entering into the casino it became clear that it has recently been refurbished – and in fact some work was still going on, with hairy arsed builders in sleeveless very much in evidence. It’s a multi level affair, and had the look of perhaps an old theatre. It’s really nicely turned out now with a nice feel about it – the usual new Genting scheme of beiges and warm browns, with some Chinese style imagery thrown in.

The slots are upstairs as you go in, then there’s a very steep staircase down to a handful of tables. It’s a bit on the warm side on there, so I headed to a lovely – but very small – bar area for a refreshing beverage. From there I watched the world go by – it has a really nice atmosphere in the place, partly because Bournemouth lives up to its reputation as a haven for older people – the slots were stuffed with essentially pensioners. Probably they couldn’t get down the stairs … it also seems odd that of all the sites in the country, this one has tiny unreadable table signs, not ideal for those whose eyes are going.

There’s a lovely looking restaurant to the rear on the upper level, and overall it seems like a really nice spot. 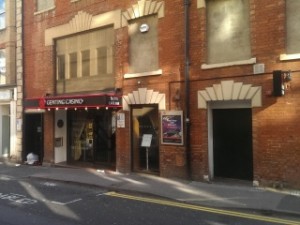