Converted Grosvenor a short walk from the city centre

The G in Newcastle is located on St James’ Boulevard, so just down the road from the footie stadium – during the season they usually have some quality offers to tie in with the game and attract people for a pre-match pint and a post-match punt. Be warned, the car park entrance appears very quickly as you approach after coming over the Redhugh bridge over the Tyne – keep an eye out.

It’s recently been refurbished into a G, having previously been a very brightly coloured Grosvenor Casino. It was so bright, actually, that it was hard on the eyes, and one element of that still remains, a very open and airy reception area, which actually jars a bit with the rest of the casino – in the standard dark, moody G environment, it looks a bit wrong to have daylight streaming in from the entrance area.

Inside, it’s a familiar environment, with a particularly spectacular moving colour wall behind the bar. Most new G casinos have a coloured ceiling, but the layout of this one doesn’t really work for a ceiling, so if you want to be hypnotised by the moving lights, look across rather than up. It’s really rather cool !

There’s a restaurant in the corner, very nice looking too, and upstairs is the good sized cardroom. It’s also notable for excellent service – very friendly staff were all over the place, and slightly unusually a valet appeared straight after we sat down at the electronic roulette terminals.

It does have its annoyances, mind, with a glazed screen with some patterns in between some of the ER terminals and the tables – surely part of the fun is to watch the ball dropping. There’s also an intensely annoying beep coming from the roulette tables, something to do with timing of the spin I think. 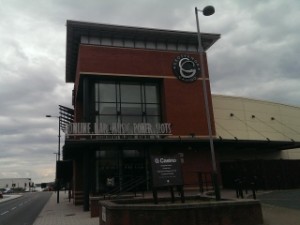