The latest casino to open in the country (damn – I must work through and delete the last couple of times I’ve written that about a site elsewhere) opened in early October 2014 in Southend-one-Sea.  It’s not the easiest place to find, which seems a strange thing to write given that it’s within a hotel that pretty much dominates the Southend skyline, right opposite the bonkers mile-plus long pier.

The hotel concerned is the Park Inn Palace, a huge old fashioned looking chap which is halfway up a pretty sharp hill – I reckon this is part deliberate by the owners – which acts as a sort of drunkard sieve, making sure that anyone beyond a certain state of refreshment basically can’t be bothered to scale the heights to get there. Obviously there’s the taxi dropoff, and in fact when you get close you realise that despite a reasonably large sign on the (sea-facing) front of the building, the entrance is around the back.

So, in you go past the bouncers, and the first thing that hits you is that there’s no reception team, or at least you don’t see them right away. That’s because for the first time, G have gone for a bar area that’s not part of the casino itself, so you can walk in (assuming you appear old enough and sober enough) and use the bar (and restaurant) without having to sign up / in. This part works pretty well, and once you get yourself acclimatised, you realise that the control barriers are just off to the left of the entrance – so get yourself a pint on the go and get used to the atmosphere, including some rather bonkers multi-coloured lights hanging down from the bar ceiling, which we discovered are a lot more subdued in the daytime. Around the corner from the bar is the restaurant, which is barriered such that it’s also accessible without signing in.

To be honest, the bar’s not the most comfortable area to sit and relax – it feels a little bit like you’re in a goldfish bowl, as the entrance is right there in front of you, and I’m really surprised there isn’t another bar inside the control point. I always figured that first time punters like to have a drink and watch the gaming, but to get a drink onto the main floor you either have to order one from the earpiece wearing valet team, or take one through with you. Minor pain, in my opinion, although at least the drinks are fairly reasonably priced. Having said that, that main bar does have one of the more tremendous attractions you’ll see – it’s a huge motion sensitive screen behind the bar. It’s quite hard to describe, but suffice to say if you go to the G Southend, stand in front of the bar and walk about or wave your arms, you will (while looking like a nutter) see the screen reacting to your movements.  Very cool.

The floor itself is pretty standard, brand new slots and tables as you would expect with, unusually, the poker room downstairs underneath the main room. They do have some innovations though – there’s a sports betting area by reception (with terminals that weren’t working when I visited) and frankly the most bizarre installation near the sports betting area, facing the bar.  It’s a cardboard cutout style thingy of a woman, with some buttons to press to get info about the casino.  Quite apart from the fact that I don’t really need a fake woman to tell me that casinos have slot machines and a bar and so on, when you’re sat in the bar you can’t help looking at “her”  – I  mean “it” – as it winks at you, points and generally haunts your mind and infests your dreams. Probably quite useful as a child scarer, if you should ever need one.

As the latest casino in the UK it certainly deserves a visit, it’s quite spectacular – and the views from the smoking terrace and the part of the bar with windows over the seafront are amazing, particularly on a beautiful day such as the one we visited on. UK casinos are evolving every month, and this is the latest version. 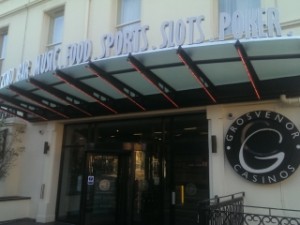