The G casino in New Brighton opened in mid 2012 – if you’re not familiar with New Brighton, it’s up near Liverpool. Not very similar to ye olde Brighton to be fair, although the beach is nicer (sand not pebbles). The site itself has a large Morrisons as a neighbour – handy for those shopping / gambling trips – and is accessed along a strip of coastline which looks like it might recently have experienced the sharp end of a nuclear war.

It’s a familiar G interior, with a very friendly reception crew, after whom you go upstairs / lift to get to the main gaming floor. The décor is again pretty standard, with very pleasant bulkhead based ceiling and the now expected bar ceiling comprised of thousands of bulbs, which usually put on a bit of a mind bending show. When we visited, however, the ceiling was set to a 1st birthday celebration theme , which being largely white had the unfortunate effect of making the bar look like an operating theatre – not very wholesome.

The site doesn’t appear to be very busy, certainly on the Friday night we visited, although it’s stuffed full of nice new kit, with state of the art slots and tables, as well as Unity 2 Electronic Roulette. The restaurant was doing a great trade – I put away a chicken and bacon melt, as lovely as ever – and we saw 20-odd people heading down from their big birthday party table in the restaurant to their own teaching gaming table, one of Grosvenor’s better ideas.

They offer 10p Electronic roulette, although annoyingly the main ER area has a glazed screen between itself and the table you’re playing on – that would be fine, but it has a pattern etched on it, so it obscures your view of the tables a bit, although the machines show a video fed of the wheel anyway.

It’s a nice casino overall, in a bit of a desolate location. We were also notably struck by how many beautiful women were wandering about semi-clothed … maybe we’ll drop by again someday …. 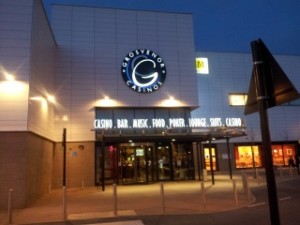