The G Didsbury looks, as you approach, like an absolute monster, but it’s all a bit deceptive – it’s upstairs only, while the downstairs bit seems to be occupied by a huge Virgin Gym. By which I mean it’s branded by Virgin, not full of … never mind.

Handily, as well as a lift and stairs they have an escalator for the lazy claustrophobe, and wandering up the escalator you emerge into a kind of lobby area with, unusually, natural light streaming in. The bar is right there as you would expect, with a very large seating area looking straight at a TV wall showing sport. In fact they’re very keen here on shouting about their sport coverage on a multitude of TVs, so it’ll be a good spot to catch a game for sure.

As you pass the bar the gaming floor is in front of you with the slots on your left, the usual up to speed Grosvenor range is in evidence. Unusually they have a bank of IGT slots where one side is connected to the Fort Knox jackpot while the other isn’t – they took my money just as fast either way, mind. The other side of the gaming floor is the poker room, and the restaurant “pod” is tucked in all the way around the other side.

We’re in the posh bit outside Manchester here, or so I’m told, and I think this place opening put a bit of a dent in both the Casino 36 and the old Gala in Stockport, as they’re both pretty close by. Having said that, there’s only so posh you can be given that there are posters all over the place telling punters that there’s a stampcard offer in the casino, where you get a free handheld blender for x number of visits. Seems a bit bingo to me, but what do I know?

There’s a lot to like about the G Didsbury, not least with the staff. I hadn’t been sat down ten seconds when a valet came and asked if I wanted a drink, which was a really impressive touch, given that in other places, despite being one of a handful of players, I’d waited ten minutes in the past. The leisure development it’s sat in is a bit depressing – cinema, gym, bowling, sundry bars (and loads of car parking) etc – but they certainly were making the best of it, with linkup offers with the cinema available, suggesting a decent movie / scoff / punt night would be easy to line up.

Overall, a really nice brand new venue, with the added bonus for regular customers that all their blending needs will be satisfied in no time. 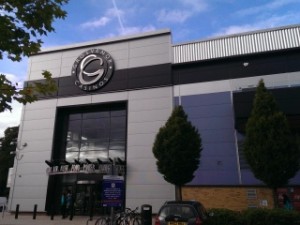