The Coventry G casino is inarguably one of a kind in the UK. The history is quite an interesting one, and starts several years ago, when all looked rosy for the UK casino market. There was talk of unlimited slots, super-casinos and huge linked jackpots that would make casinos the go-to place for all ages (over 18) and hoover up the bingo and arcade markets in all directions. The big US operators got wind of all this and began forming a disorderly queue to be first in line to tap into this untold bounty of profit, secure in the knowledge that their expertise was more than enough to show these tinpot Brits how to make real money out of the casino game.

The first to really commit was Isle of Capri, an operator with a bunch of casinos in the US (and elsewhere, probably – if I thought you’d care, I’d look it up). They took a huge 120,000 square foot unit in the Ricoh arena, home to Coventry City Football Club, actually underneath the stadium. To get that in perspective, large UK sites like Aspers Newcastle will be about 45,000 square feet, and mid-sized ones such as Grosvenor Southampton between 15 and 20, with most new G sites being around about 30. Trust me, it was big.

It had a huge bar facility, which did very well on match days, and vast gaming resources in every department …. except slots, where they were only allowed 20, same as any other casino. Clearly they thought they were easily able to get past this with their “If you build it they will come” mentality, which has worked everywhere else …. only some UK casino people were making nervous noises on their behalf, with a slightly out of town location not conducive to the drinking and non drink-driving culture in the UK, and thousands of roulette machines available in every city, town and village nearby in betting shops. The yanks were not to be discouraged, however, and spent upwards of £30 million fitting the place out in the finest style imaginable – not many casinos have their own waterfall in the reception area, for a start.

As you may have gathered from the tone of the story above, it didn’t work out so well for Isle of Capri. They traded for somewhere around three years, lost another £10 Million on top of the £30 Million fitout costs and sold the whole thing to Rank (ie G casinos) for something south of £1 Million. There’s certainly an amount of Schadenfreude about all this – not too many UK casino people burst into tears thinking about how much money the perceived arrogant Americans lost – but they were also a little unlucky. It was a bold move to go so big so early, and the law never changed to help them, but assuming models that work in one jurisdiction will work in another will a totally different gaming dynamic is always fraught with danger.

In any case, G trimmed down the site size and presumably gave some back to the landlord, and now trade by all accounts very successfully. The waterfall’s still there, and plenty more besides, with a couple of bars, a show room called Lady G’s, and all the modern gear you would expect in such a place. The poker room is enormous and very successful, and they have kept the slightly tropical feel of the décor – it’s a little bit reminiscent of a smaller version of Mandalay Bay, if you’ve ever been to Vegas. It really has to be seen, as a monument to ambition that outpaced the changes in the UK law, and a stark warning to anyone who takes a “one size fits all” approach. For all that, now it’s on a more appropriate scale and has picked up business while keeping costs sensible it is a great place to check out. 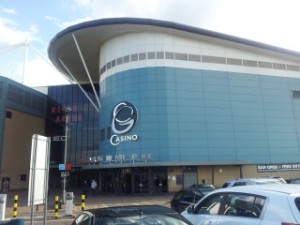