Just out of town but everything you want and more

The G in Bury New Road is about 10 minutes by cab from the centre of the city – my fare was £8, for your guidance. It’s a bit stand alone, and looks mighty impressive at night, with some nice sweeping curves on the outside.

Once you get into reception, you immediately realise it’s another one of these sites with two licences in the same building. In this case the second room only has slots and electronic roulettes, and in fact has no booze licence, so it’s completely dry, although they have valet service for soft drinks, tea and coffees. On reflection, it’s not such a bad situation in fact – I visited on a Saturday night, and there had been a fair few adult beverages quaffed between the assembled patrons, so the idea of a quieter area to have a punt wasn’t bad at all.

The main room is a good size, and resembles the new G at Reading, with a lovely ceiling effect and pleasant red and burgundy colouring. There’s a huge bar, with some intensely annoying lampshades that blocked my view of Match of the Day! There’s also decent sized stage area – as we arrived there was live entertainment, with a lady lashing out the hits of Adele in fine style – she even looked the part too. Later she returned with a medley of other tunes, sadly some of which sounded a little less tunefull – she must be desperately hoping Adele’s next album is released soon …

Taking a tour around the casino, they have what I assume is a VIP room, coloured gold, although the tables weren’t open – maybe it’s more of a Sunday / Monday Chinese thing. There is also a gargantuan poker room with around 25 tables, although amazingly only three of them had action – the dying stages of a tournament, a satellite game of some sort, and just the one cash game. Surely it will pick up over time, it’s a hell of a big room for one cash game.

The restaurant has two areas, one a lot less formal than the other, and another booth area as well – plenty of choice, for a pretty standard menu. Much of it overlooks the gaming floor, which was very lively, and included a rare sight, a full sized dice table, and although only one end was actually available for play, it was busy all night. The gaming area was also notable for the fact that I had a truly stupendous run on that most tedious and hard-to-win-at game, Three Card Poker, which was more than welcome. Cashing out, however, I was greeted by a very unexpected and slightly menacing sight – the cash desk is behind bulletproof glass with service hatches a bit like a bank – must be in a slightly lively area of Manchester ! At least my win wasn’t big enough to worry about the blag of the century on the way home, but it certainly put an exclamation mark on a great night out. 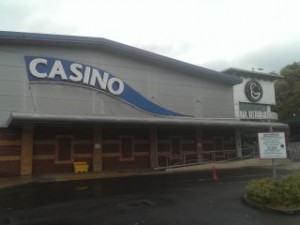