An oldie but a goody

Oh my word.  If ever you needed a demonstration of how it is that serious casino players aren’t that fussed about their environment, take a wander into the Genting casino at York Place and marvel.

The building has seen better days as a whole, but you get a true idea of the nature of the place once you step inside.  The décor could politely be described as, “weathered”, with carpets that are generally approaching see-through territory, wallpaper with some interesting features that weren’t there years ago when it was new, and table layouts (ie baizes) that bare stains of questionable provenance, some of which verge on downright biologically threatening proportions.

The cash desk is also worth a look for a connoisseur of ugliness, due presumably to the lack of space it looks like it’s been hit by a paperwork bomb (a little known device used by the 1957 Bureaucratic Revolution.  Hold on, I seem to be talking absolute rubbish …..)

The casino itself is on two levels, with most of the gaming tables on the ground level, along with about 12 slots and a few auto roulettes.  Upstairs there are another couple of slots, a bar area and a very 1970’s hole in the floor (by design, this time) so you can have a nosy at the action below. There’s a valet station on the ground floor with draught beer too.

This place does have the distinction of the most slots out of action needing repair I’ve ever seen in one casino, at 3, and they don’t even have the full complement of 20 in the first place! I guess it’s not much of a slots casino, especially considering Genting haven’t even put in place their highly confusing card system, so it’s all coin in and out. They even have the classic old promo of the special logo’d coin somewhere in the hoppers – if it comes out in your payout, you win a bonus.  I genuinely thought we’d seen the last of that 15 years ago. The gear isn’t that modern either, nothing less than several years old I’d say.

The location is, as always, the key however.  Just a short walk from Princes Street, and  Edinburgh’s main Waverley train station, is where you want to be, and even on a Thursday night there was plenty of action, and this with a site currently inaccessible by car due to a dirty great big train track being put in place. Being able to attract many Chinese punters generally makes a solid casino proposition, and they were there in force, despite Thursday not being a particularly likely night.

I’d fairly confidently say that it’s your best bet if you like a busy spot – both because of the location, plus it tiny size makes it look busy – but if you fancy taking your other half somewhere nice … find another casino in Edinburgh! 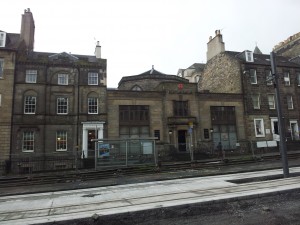