Marooned in Leith, this is a nice spot with plenty of space

The Genting site in Leith is pretty difficult to review in depth, it’s sort of a …. Nothing place really. It’s situated near a large set of leisure developments, but apparently the whole area was supposed to be one big leisure destination, until the money ran out. Instead of a huge destination, you’ve got a variety of nice looking places that don’t quite join up, and the casino is right at one end, not really walking distance from anywhere. As a result, it doesn’t seem to be very busy.

The building design doesn’t help, with a high ceiling only making it look emptier. It has plenty of car parking, and a typical Genting design, with the restaurant on the upper floor and a huge, open main gaming area on ground.  The line up is a little unusual – 6 roulettes, 5 card tables, 1 full size Punto, 4 dart boards and 2 pool tables. Not too many casinos would match that, one assumes they quickly realised they had more space than they needed and put in some extra facilities. Probably harder to do your dough playing darts than on roulette, mind, although I expect there are some dart sharks around ready to have a bet on a game.  That’s not a sentence I’ve needed to write before.

The slots are arrayed around the edge of the floor, and have the usual mix of one game IGT boxes with a few Gaminators. You can tell that a site caters for regulars when the maximum time you can reserve a machine for isn’t the 10 minutes that most sites adopt, but an hour and a half!  They must have serious slot punters for sure.

They were warming up to Chinese New Year when I dropped by, and the decorations were pretty good.  I also thought they had some sort of “King of Chinese New Year” deal going on near the Punto table, until I realised it was an inspectors chair raised about 2 feet up. Sit on that, you’ll get vertigo!

Overall it feels like a huge box that’s in the wrong place, but I guess if you want a peaceful location then this would be for you. Come to think of it, if you wanted a go kart track, paintballing arena or space to sleep about 900 people undisturbed it might fit the bill as well. 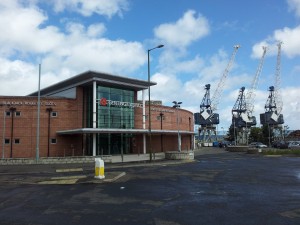