First impressions of this casino out to the west of Edinburgh weren’t too promising – the neon signage looks like it’s been the favourite target of airgun toting locals – but it’s an art deco style building with a certain amount of charm, which is carried through to the furnishing inside.

Evidently it used to be part of a bigger leisure development, but now it’s a bit isolated, with not much about other than a load of retail and offices. The story goes that they get all the trade from west of Edinburgh, as you can get there (it’s right by the airport) without going into the city itself – they have plenty of parking for travellers.

A very friendly reception team greeted me – as well they might, as one of only 3 punters in the place. The tables don’t open until 5pm, so I had a dart at the slots. It was all old single game IGT machines, with a few Gaminators thrown in (with the Flexi-link jackpot), and – get this – still on coin payouts!  I mean, I know it’s not Las Vegas, but I thought everyone had TITO or card based systems these days – still, if you want filthy hands and a pain in the backside to change machines, you’ll fit right in. On the plus side, they have the comfiest slot chairs you’ll ever find. I also had a very cool experience, the very helpful valet geezer pointed out that I’d left 50p in a machine, which I span to win £2.  Obviously then I had to spin at £2, hit the bonus feature, and rifled out £59.  Happy days …. Naturally I bunced him a tenner – he deserved a fair share – everyone wins. Except Gala, and who cares about them.

Also slightly alarming was the fact that, obviously in retrospect, the ATMs spit out Scottish notes. I’m glad the slots recognised them, I was struggling a bit ….

A quick exploration showed they have 6 roulettes, 5 card tables and a smallish poker room. They also at time of writing were warming up to a big darts evening, with some of the bigger names. Ok, it’s not Tom Jones or David Copperfield, but it had the look of a fun night.

It’s a nice enough place, although it doesn’t look to be thriving. There’s a showcase of Louis Vitton products on the floor, which seemed a tad optimistic in my opinion, but overall a pleasant enough place. 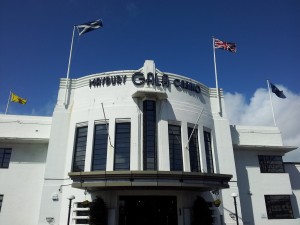