The Colony Club Casino is towards the top end of the range of London casinos, although not quite in the stratospheric “big 6” territory – I could tell that from the fact that they let me through the door ! It’s located in a bit of a purple patch of casinos, amid Les Ambassadeurs, the Playboy Club and even LCI’s UK office just around the corner.

Inside it’s really rather spectacular, having recently been refurbished. There’s a fabulous bar on the right as you enter – it’s before you get to the reception desk, so it’s ideal for a casual (if pricey) drink. Talking of prices, it’s expensive but not crazy-priced – we had a large G&T and a bottle of Peroni for £12, not pub prices but not as steep as the Palm Beach, which is odd given that they’re both part of Genting and if anything the Colony Club seems to be aimed at a more top end market.

The main gaming floor is quite compact and not for the cheapskate – I couldn’t see a Blackjack table for less than £25 minimum – and I wouldn’t try to get in unless you’re dressed reasonably respectably. If you’re after a reference point, the staff all wear Tuxedos with black bow ties. As an aside, one of them also sports the most amazing moustache I’ve ever seen, top effort sir !

The décor is all new and very classy, I especially liked the curtains around the gaming floor which have what appear to be butterflies as decorations. Obviously they’re not real, an insectoid graveyard wouldn’t be particularly appealing right by the bar. The service is of course excellent, with the most helpful barman bringing over snacks, nuts and so on.

A wary circuit of the gaming confirmed that the tables were out of my price range, but apologetically tucked into the corner is the electronic area, with a grand total of 7 slots and 2 electronic roulettes. You can tell it’s a bit different in here when you realise that the machines in here don’t even accept the Genting loyalty card at all, and again have the sound turned off, which makes them a bit flat to play. The background music around the casino in fact is at a very low level – but with gaming at this level, I guess it generates its own atmosphere.

Just before leaving we took a look at the restaurant area upstairs, which looks lovely. Plenty of diners were tucking in at the main tables, and there’s even a Teppanyaki area for parties, and another bar at which you can sit and have a drink, while musing on how much richer everyone else in the building is than you. 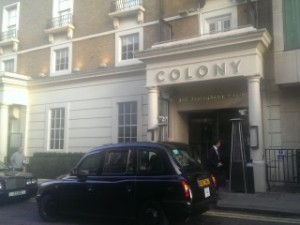