Ladies and gentlemen, I present to you …. The world’s first stealth casino. Casino 36 in Stockport is so superbly camouflaged, blends in so well into its environment, it’s a wonder anyone ever knows where it is. I imagine it’s not on purpose – and there’s a neon sign that probably stands out quite well at night – but when I visited around 2pm, my Google maps thingy walked me right up to it, at which point I thought it was a pub and carried on down the road. There’s no signage as such, and the flags that hang out with the name emblazoned upon them had been wound around the flagpoles, making the place virtually invisible. It’s only about a half mile from the Gala Stockport too. There is signage referring to what I presume is a previous life for the cub – the “Cheshire Sporting Club” – and some rather nifty stained glass window type chaps, with sporting images thereon.

Anyway, once you detect the place and wander in, there’s a standard tedious process – no, being a member at Rubicon Wolverhampton (part of the same chain) doesn’t stop you from having to sign up all over again, and yes, you get a new card, and yes, they type all your details in, expect you to fill in a form with all the same details and photocopy your ID with the same details again. Dull.

It was all a bit odd when I got inside too – it’s very traditional looking, with timber everywhere and lots of red colouring, but most odd was when I sat at the bar and it was a good ten minutes before I saw even a single member of staff (except the cashier, who was tucked away in the cash desk that I never saw). They opened the tables at about 2.30, so until then I had to wait for the valet / bar person to come down from upstairs to be sure they were actually open and I hadn’t been allowed into a closed site by mistake. At least they had the football on.

Downstairs are most of the tables and a mix of slots, some newish, mostly older versions. One of the newer slots, rather annoyingly, had a touchscreen with a fault, so you couldn’t change games, rather ruining the point of a multigame terminal in fact. Upstairs are a couple more tables, some comfy seating and the rest of the slots, some of which really are rather vintage – imagine having to transfer your funds from bank to credit meter £2 at a time, and you’ll get the picture.

There are some nice touches – if you want a glass of water, you get a complimentary bottle, and it certainly has a homely feel to the place. They have good telly watching facilities too on both floors, so overall it’s actually quite a pleasant spot to pass the time. 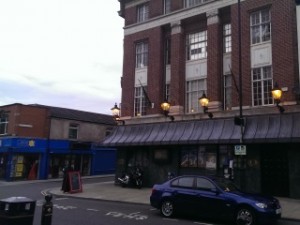