Out of town centre all in one box

The Caesars casino in Brighton – better known as the Rendezvous, since evidently Caesars like to have a bunch of different brands (Alea, Rendezvous, Playboy etc) is situated down at the Marina village, a couple of miles (ie don’t try and walk it) from the centre. When you drive from the Pier end of town, don’t panic if you think you’ve driven past it, you have to go past and do a U-turn at some lights.

The development is a bit of a mixture, with some lovely residential, nice restaurants, an Asda, a McDonalds and the worst run cinema I’ve ever been to next door, which appears to have a problem with popcorn grenades going off every day – or perhaps lazy cleaners. The casino itself is pretty easy to find, and has its own car park, and although that is often full (and usually seems to be for valet parking) there’s an enormous car park right next door. In fact this car park is a bit of a tricky customer – you don’t realise at first that it’s two that join in the middle, and are indistinguishable from each other if you park without concentrating – make sure you check if you are in the East or the West bit. I didn’t, and once I’d got to 15 minutes looking for my car, was almost at the stage of tears of frustration. I would say I’ll never do that again, but this was the second time it’s happened to me (in my defence, the squares of Milton Keynes all look the same too ……)

At the casino, it’s open door, so wander in. Bear in mind that it’s on two levels, and most unusually, all the action is on the top floor, so head straight up in the lift. I turned left into the ground floor, where it used to all happen, to find a huge largely empty room with a few partiers apparently having a learn to play session – all very odd. One can only assume they built the place too big – like I guess they did with the now-closed Leeds site. There’s a spiral staircase here too to get to the top deck and all the action.

On this level, it was all a lot more interesting, being a busy Friday night. The slots and many of the Electronic Roulette terminals are in the corner where the lift comes out, and it’s a nice hidey hole to sit and play in, along with the friendliest slot host I have ever seen in UK casinos (who also looked pretty good in a tight, short dress). There’s a poker room tucked into the corner, and a large restaurant along one side, which was largely populated by a 70th birthday party – nice touch, to get a punting trip on your big day.

It’s a site full of steps which feels a little like a booby trapped deserted Vietnamese village – just when you are relaxing and off your guard, there’s another unexpected step, like the lethal one in the gents toilets, which nearly took me out for good. Headed back onto the floor however, you can take a seat in the really nice bar area, where there are also ERs overlooking the floor, albeit looking through an extraordinary ER jackpot sign, with rolling amounts you can win with seemingly no clue or instruction at all as to how you go about trying to pocket them, all a little odd.

Overall it’s a lovely if largely unused site, and with a large number of rather glamorously dressed women wandering about (and, I expect, men I didn’t notice so much) it seems popular, certainly on a weekend. An upscale spot for a night out. 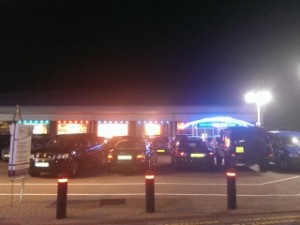