The ex-Gala, now Grosvenor site in Bradford sits within a huge leisure complex near the city centre – if I said it comprises the usual chain suspects, I bet you could guess the first two or three easily …. Cineworld (tick), Frankie and Benny’s (tick), Nandos (tick) and so on. It’s none the worse for it, though, and seems to be running ok.

There are two entrances, and I went in through what turned out to be the back way, which is actually a stiff walk down a long corridor with no signage at all – for a minute I thought I was going to star in the casino version of “Hostel”. Eventually I popped out of the other end onto the gaming floor. It’s a fairly ugly site, all recessed neon and shiny chrome, with what appears to be a VIP area and a really rather pleasant bar area with the restaurant area off to the side.

The machines are quite out of keeping with the freshness of the rest of the internal fitout, with lots of single game IGT machines, including a total of 5 Pharoah’s Fortune games out of 20 machines. Perhaps the good folk of Bradford just can’t get enough plastic Egyptological ridiculousness.

They have a few nice touches such as sweetie jars near the bar, and the main snack item on the menu isn’t the usual sandwich or hellaciously hot Panini, but a curry dish, one imagines rather a nice one too if they hope to sell any in a town with such a tremendous array of wonderful Asian cuisine providers.

There are some annoying features too – I defy anyone to play their electronic roulette for more than ten minutes, as the live feed they get from the wheel appears to be on some sort of hip-hop setting, with two seconds of action and then a one second freeze, all very annoying. They also evidently glory in their poker offer, with posters up advertising the tournament schedule, despite the fact that I was there about 10 minutes after the scheduled off time, with no players in sight. They did however have a cash game dealer at a table ready to go – so if you wanted to play you’d have got a game running pretty quickly.

There’s ample car parking, so if you’re in town why not head down and take a look. 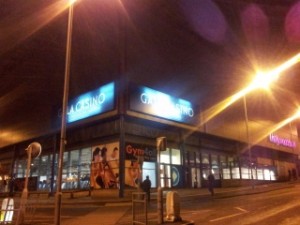