Poker for vaguely curious but not really interested beginners

If you like a trip to a casino, but generally look at the poker room with a mixture of confusion, nervousness and just a teeny bit of curiosity, this post is aimed at you.  If you want to learn how to play the game successfully, or think you can read here how to make a living out of it, there are plenty of other places to find that out, I’m just going to go over the very basics.

The first thing to know is that, despite many legal rulings on both sides, in my opinion the truth is that poker is a game mixing skill and luck, where skill will triumph over the long term, but luck can grant you a good night, week or even longer if you get the right luck at the right time. There is a reason for the distinction, by the way – whether or not it’s a skill game has been the deciding factor in some jurisdictions as to whether it’s legal to offer the game. 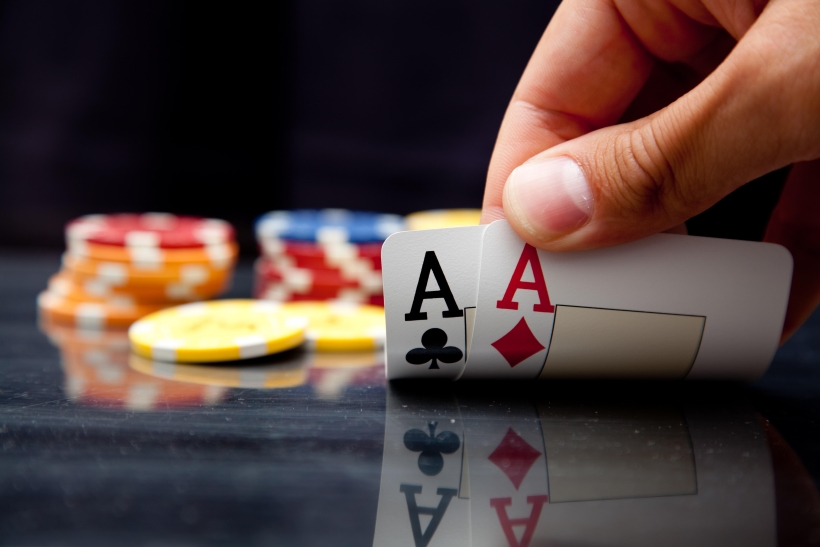 It’s your pair of bullets, innit. Best hand to start of with in Texas Hold ‘Em, not guaranteed to win, mind.

In a casino setting, the key to know is that there are fundamentally two types of poker, tournaments and cash games. The distinction is pretty important, principally in the level of risk. With a tournament, you can only lose the amount you buy in for – essentially (although note below) that is a fixed sum.  In a cash game, while it’s still true that you can only lose what you buy in for (and you can forget “Lock Stock and Two Smoking Barrels type of situations, where the lads have a nightmare and end up owing £250K despite only taking £100K to the game, that can’t happen) your whole stack of chips is at risk in any given hand.

To put it into perspective, a typical provincial poker tournament might be a £50 Freezeout.  This means that you buy in for £50, and for that you get a fixed number of “points”, represented by chips with numbers on them – maybe in this case you might get 7,000 chips (in denominations of up to 1,000 you don’t get 7,000 bits of plastic). You then play until you either win, or run out of chips, at which point you get knocked out, but you can never lose more than the original £50. It’s a comfortable way of doing things for beginners.  Incidentally, a lot of tournaments will be “re-buy” tournaments, where you can buy back in (usually) for the first two hours, but you never have to, so you can control your total costs.

Once the tournament starts, without getting into the detail of how to play the game, the stakes gradually get higher and higher, in terms of the points you have to play each hand, until people start getting knocked out by running out of chips. Usually something like the last 20% of the field will get some sort of share of the prize money (which is all the entry money added together, less some fees for the house), with the winner getting the lion’s share, maybe 30%. 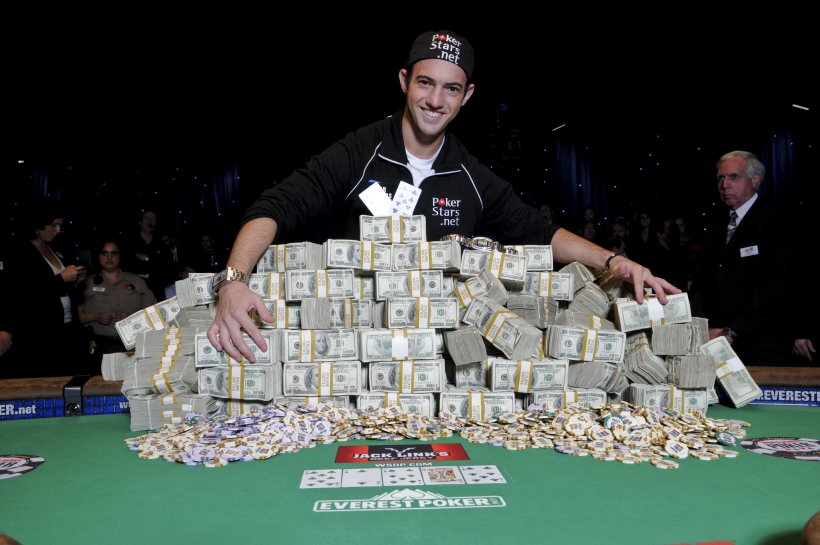 To the victor, the spoils. Please note – this will not be you.

Cash poker is a bit different.  In a cash game, you buy in for whatever you feel comfortable with – most card rooms will have upper and lower limits, depending on the size of the game.  You are free to play for as long as you want, and leave at any time – players will come and go on a regular basis. The one general rule is that you don’t take money off the table – if you’re having a good session, you keep the money you’ve won on the table and are theoretically at risk of losing it all on any given hand. This is where the serious money is usually won and lost, and the serious professionals will be seen playing at the cash tables.  Any given casino will have a handful of professional players (and a whole bunch more who claim to be professional but are either liars or on a lucky run).

Poker’s a great fun game to play, although it is something of a time eater – if you’re in a game with some fun people (not always a given – some poker obsessives can be pretty intense) then it’s easy to look down and find six hours have disappeared. It’s easy to become an ok player fairly quickly – you’ll have your share of encouraging wins – although if you want to try to make serous money out of it, unless you are prepared to put in literally years of work, you’re about ten years too late, I fear.